In ancient Rome, gladiator fights were a very popular sight. These battles were distinguished by great cruelty, slave-warriors were forced to fight not only ag PlayTech ainst each other but also against wild animals. Gladiatorial battles had sometimes horrified even the sophisticated spectators, but always gathered crowds of people.

In 2000, the story of a gladiator formed the basis of a very popular Hollywood film with Russell Crowe in the lead role. The film gathered many prestigious awards and was named the best film of the year. "Gladiator" got 5 Oscar statuettes, and thus entered the history of world cinema forever. PlayTech also decided to contribute to the popularity of the dramatic history of gladiator fights to tell about the victories and failures of brave warriors with the help of a Gladiator slot with progressive jackpot. 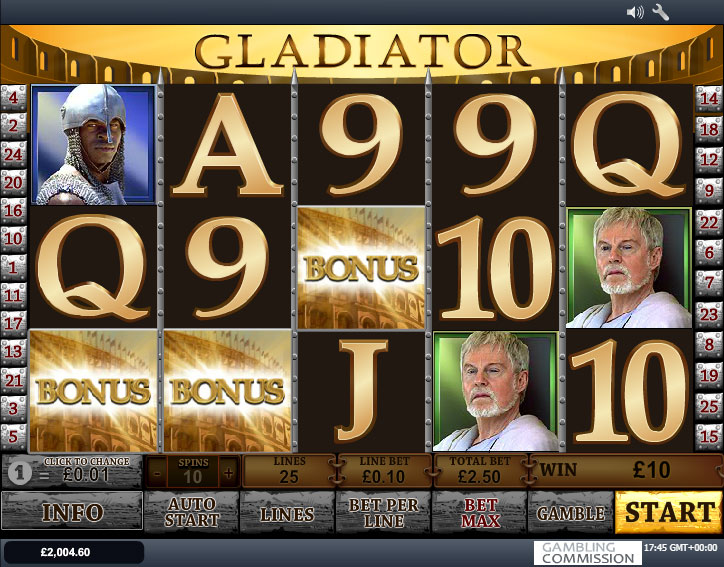 Gladiator is a five-reel 25-line slot from PlayTech with a Wild symbol, Scatter, multipliers, a risky game, Bonus game and other features that will certainly interest the players. The characters of the Gladiator movie have become symbols in this game, and you will not only see static movie characters but also scenes from the movie, which are included in the slot. Commodus, the son of Marcus Aurelius, talks to his sister, one of the gladiators, Lucilla, Proximo, Juba, and other characters are active and talk to you.

Each winning combination is accompanied by an episode of the film, so the online slot is not less exciting than the movie itself, and don’t forget the gambling excitement and the opportunity to win a large amount of money. Along with the characters, there are also card symbols in the game, starting from nine and ending with an ace.

The minimum denomination of tokens is 1 cent, so making small bets is not a problem. However, many gamblers find such a cautious game not fun. For such players, there are higher bets: 5, 10, 25 cents, half a dollar, a dollar, two or five. With the help of the Maximum Bet option, you can activate 25 lines in the game, and this mode is the most exciting. The maximum bet is $1,250 per spin. But it's just insane to make such bets, right?

The Wild symbol in the game is the Gladiator. The Gladiator can appear only on the second, third and fourth reels and replaces any symbols, it can also launch a bonus multiplier. When the bonus game starts, you will see 9 helmets that appear on the screen in a random order. Helmets are made of different materials — gold, bronze or silver — and have the different cost. I had such bonuses three times during the game. It is necessary that 3 identical helmets appear anywhere on the screen. Then they connect in a row in the middle of the screen, and the bonus calculation begins. The first time, I received 40 dollars, the second — 55, and the third time I won $51, so the range of the bonus, in my opinion, is about the same.

In the Gladiator slot, Scatter is the Colosseum, but no matter how hard I tried, I could not get 3 Scatter symbols at the same time. 2 Scatter symbols doubled my total bet. Three Scatters would launch a Bonus game, but I did not succeed. The more lucky players tell, in the Bonus game, you will see 4 rows, each row determines the total win: the first row shows you the number of Free Spins, the second — the multiplier, the third row gives you a Scatter and the fourth additional Wild symbols.

There is also a risky game in the Gladiator slot. Its rules are extremely simple. You need to choose either red or black. You can either double the winnings or lose it. To stop risky games, you just need to click "Receive", and you return to normal game mode.

You are free to stop the game at any time, without waiting for the reels to stop.

You can win the jackpot in this slot. If you draw 5 emperor symbols on the active line, you can earn 5,000 coins. The Lucia character, the emperor's sister, will bring you 1000 bets if all 5 characters are in a row.

The slot is popular primarily due to the presence of many of your favorite characters and the film popularity itself. The scenes from the movie liven up this slot making it much more interesting than other slots. The main message of the film is well reflected in the slot: it is not necessary to be an emperor to be strong, even a slave can be more powerful if he is purposeful and uncompromising.

Where to Play the Gladiator Slot