The power of cats over the hearts, souls, and minds of Internet users is becoming stronger every day. Every day we stumble upon a collection of photos with cute cats in social networks, we are haunted by videos with funny kittens on YouTube. And we humbly spend 15–20 minutes to view these cute photos, even if we need to do an important work!

And now, these furry swindlers have captured even online casinos. There are no major software developers who would not introduce one or more video slots dedicated to cats. In particular, PlayTech had already several of those in stock, and the other day it presented another novelty of this kind. We are talking about the Cat in Vegas slot, which we consider in this review.

By the way, we are not quite sure, but the main character of the slot is very similar to the character from the cult film Fear and Loathing in Las Vegas. 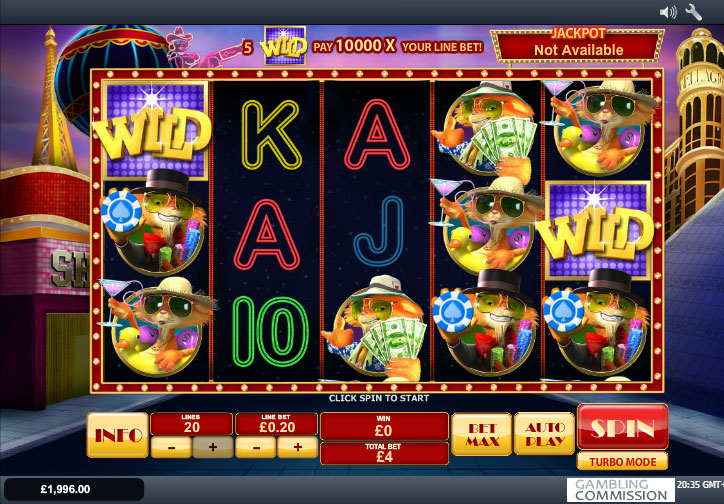 Cat in Vegas is a 5-reel slot with twenty paylines. The rules allow you to choose 1-20 active lines for the game. You can bet on each line from one cent to one hundred dollars, which means the maximum bet of two thousand dollars per spin. There are ordinary pictures, special characters and Bonus games of several types. All of them are discussed in detail below.

Most payments are done for combinations of several images of the same type. Identical elements should line up on the active band starting at the leftmost column. Winnings are awarded only for the longest sequence on the line. At the same time, in one round, several paid chains are allowed.

To calculate winnings, the program multiplies the bet made on the line by the coefficient indicated for the resulting combination in the paytable. The multipliers range from x4 to x10,000. There is no doubling round in the game, so the money won immediately ends up at the main account.

Cat in Vegas has a theoretical return to player (RTP) of 92%.

The slot is dedicated to the adventures of the red cat Felix in Las Vegas, where the cat breaks off to the fullest. Accordingly, you see a cat with casino chips on the reels, a fan of dollars, and even in a pool with a cocktail in its paw. In addition, the denominations of playing cards are used as basic casinos, as if they are made of colored neon lamps.

The game features several special characters. These are Wild, Scatter (The King Show logo) and two bonus pictures (Bonus on the screen of the three-reel slot machine and the Wheel of Fortune). Their features are:

Specify details of the rules in the Help section.

The progressive jackpot is raffled off in the bonus Vegas Slots. Any participant of this draw has the opportunity to win the jackpot.

All buttons on the control panel are simple and do not cause difficulties in understanding their purpose. You can choose the number of active paylines and the size of the bet using the convenient buttons.

There is a special button to stop the spinning reels ahead of time. You can also activate the Turbo mode and the speed of the gameplay will increase. There is an automatic betting mode. In this mode, you can either specify the exact number of spins or set the auto game until the Bonus game starts.

The paytable also contains other important information: general rules, special character features, bonus rounds, combination coefficients, the arrangement of lines, and so on. More information can be found in a separate reference section. To enter this section, click on the key icon in the upper right corner and select the Help tab. There you will also find a section with settings to adjust various parameters.

PlayTech has once again confirmed that it is one of the leaders in the online casino software market. It is a great slot with excellent graphics, interesting themes, amazing animation, an amazing selection of game features and lots of other advantages. But the level of refund to the player is very low and this is the only significant drawback of the slot.

Where to Play the Cat in Vegas Slot