Frankie Dettori, an Italian jockey, is a real legend in the world of horse racing and a celebrity of international standing. Frankie won a huge number of tournaments, received many different awards and, for his impressive achievements, he was awarded the title of Cavalier of the Order of the British Empire.

A few years ago, developers from PlayTech dedicated to the outstanding jockey the Frankie Dettori's Magic Seven entertainment slot. The slot turned out to be quite a success and that is why experts of a well–known software manufacturer recently presented the second part of this video slot. This slot model has a wider choice of options, including progressive jackpots, and also has an improved interface and graphics. 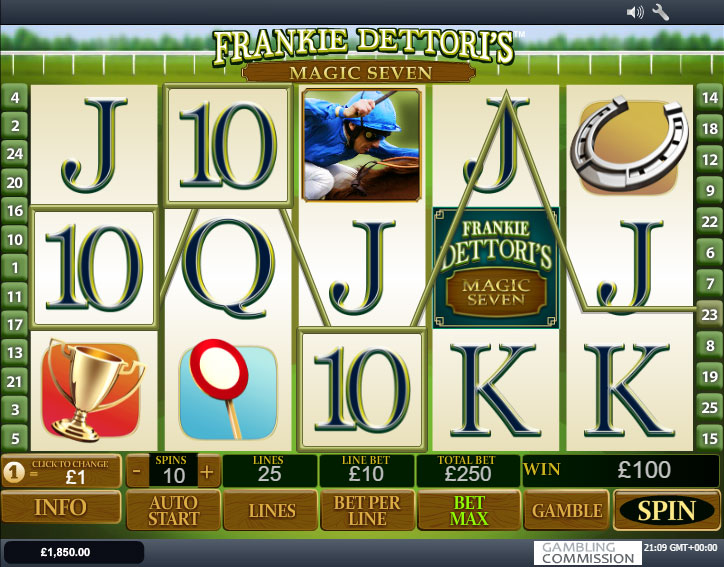 Frankie Dettori’s Magic Seven Jackpot has five reels, twenty–five lines and fifteen symbols on the main screen. In the slot, there are special symbols, Free Spins, themed prize round, and also a risky game. The user can activate any number of paylines proposed. Line bets are automatically aligned. For each position, a bet of up to ten coins is accepted, from one cent to two dollars. That is, the minimum bet per round is limited to one cent and the maximum amount reaches five hundred dollars.

Base symbols bring winnings if they are on active lines in the form of continuous chains of identical pictures, pictures are counted from the first column on the left. The minimum number of pictures for a winning combination is two or three (depending on the type of the image). For a single taken position, the payment is fulfilled only for the longest chain, but, according to different lines in one round, there may be several payments.

The amount of winnings is calculated by multiplying the line bet by the combination coefficient specified for each of the possible formations in the special payout table. Multipliers are from x10 to x7777. If according to the results of the round, there is more than one chain of winning combinations on the screen, then the payments accrued on them are summed up.

You can immediately take the money or use it in the risk game. The user can risk all credits or half of them. In the game of chance, closed cards appear on a separate screen. You need to choose one of them. If your card is higher than the dealer's card, then your bet is doubled. Otherwise, you lose. With equal cards, a draw is declared (the suits do not matter). You can play several times in a row, but there is the maximum for the game of chances stipulated by the rules.

You can see an image of Frankie Dettori in different angles, as well as various items related to horse racing: a horseshoe, a cup, and so on. In addition, the game features cards from ten to Ace.

Let's look at the bonus rounds available in this slot:

In Frankie Dettori’s Magic Seven Jackpot, there are two separate progressive jackpots: Golden 7 and Silver 5. They are accumulated due to the deduction of 0.99% of all bets to the prize pool. The starting amounts of the jackpots are €70,000 and €7,000, accordingly.

Each user participates in the jackpot draw. A special round may begin in any of the spins, but the higher your bet, the more likely you get it. If you participate in a special round, you are guaranteed to get one of two jackpots. The jackpot draws run on an additional screen, where twelve closed cells appear (3x4). Seven cells hide gold cups, and five – silver. Open the cells in a random order until you collect all the gold or all the silver trophies. As soon as you collect a complete set, you become the owner of the corresponding progressive jackpot.

PlayTech slots are available in a variety of languages. Therefore, you will have no difficulty in understanding the features of the Frankie Dettori’s Magic Seven Jackpot control panel. Pay attention to a convenient betting system. You need to specify the number of paylines, the bet and the value of the coins in the individual windows. There is an automatic game mode.

In the Info section, you will find a payout table, general rules, a description of special symbols and bonus options. The current jackpot sizes are listed next to the slot name.

In the upper right corner, there is the image of a wrench. This button opens tabs with the help section (it contains comprehensive information about the model), settings (sound, interface, and so on) and statistics (which is maintained only while playing for money).

Most casinos offer to download a slot or run it directly in the browser, so you can choose the most convenient option for you.

This slot is interesting because of the variety of functions. Free Spins, progressive jackpots, bonus rounds, special symbols – all these options make the game rich and interesting. A large number of combinations with high multipliers are able to replenish your bankroll.

Where to Play the Frankie Dettori's Silver 5 Slot