Is Lottery a gambling? I doubt it is even a game not speaking about gambling. As I see ancient lottery, it was nothing about a game, because it was based on some fateful decision a person was not able to influence on or interfere with: to draw a lot was about personal fate, not even luck. Some scientists say that the first mention of the lottery, as a kind of a game, springs from the ancient Greek mythology. They say ancient warriors had to draw out lots to enter into a duel with the formidable and invincible Zeus. They throw pebbles into a golden helmet one of which was fateful. Then the pebbles were thoroughly mixed and warriors took out blindly their lots. To win or to lose — not a great choice and their lives at stake. Does it remember a modern lottery game? Do you think they were gambling?

Some other scientists found the original Lottery in Bible. They say that in the Book of Numbers (chapter 26), there is a dialogue between the God and Moses, where Moses was commanded to count all the "sons of Israel" to divide by lot between them the lands along the Jordan River. So, there was a lot and there was a sort of lottery. In this Biblical moment, the historians see the birth of the ancient lottery: there was a substantial reward for participants, but they also need some luck to get it. Of course, it was mainly about the God's encouragement given to the Israelites for the trials and hardships suffered, but isn’t there something about luck in receiving the reward? Does it look more like a modern lottery in comparison with the previous example? The God didn’t say exactly “let’s play lottery game”, but He might mean it, say those historians. So originally it was always about the God’s will.

There were lotteries in ancient China and Rome. In 100 BC, in China the Keno game was invented and was more like a modern lottery than anything else before. The funds raised with the lottery were always spent for the benefit of the country. For example, for the lottery’s money the "Great Wall of China" was erected. At about the same time, in ancient Rome, various forms of lottery games flourished rapidly and also raised funds for repairing municipal buildings, bridges and roads. The lotteries were timed to holidays and poor citizens could participate in them for free hoping for God’s will and substantial monetary reward like everyone else. 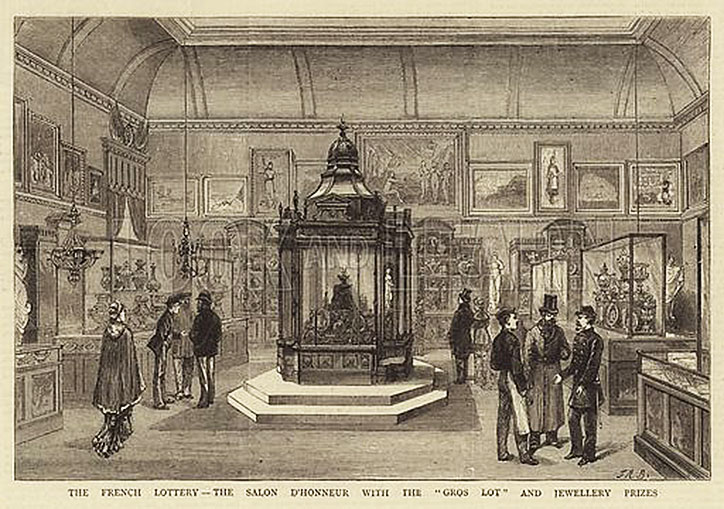 The origin of the European Lottery

In Europe lottery games were very popular and widely used. According to the historical sources, the very first lottery was held in 1466 in Brugge, Belgian province of West Flanders. The widow of the famous artist Jan Van Eyck organized the lottery in memory of the famous artist. Anyone could take part in it. All funds raised by the lottery were to support the poor citizens of the city. And it was a great success, Belgian like that kind of fundraising and enjoyed it. So, the subsequent lotteries were used to collect the money for city support or to build a chapel, a monastery, a channel or necessary port facilities.

In 1520, the French king Francis, the founder of the Angouleme dynasty of Valois, publishes the first decree on holding lottery games in the country. The adoption of this decision was influenced by the urgent need to replenish the state treasury. Many French towns were involved in lottery games, but mainly it was cities with a large population, such as Lyon, Paris, Strasbourg, Lille and Bordeaux.

The first Italian lottery was organized in Florence in 1530. This lottery was considered one of the most sensational lotteries in the country, mostly because of big monetary prizes. The lottery "De Lotto de Firenze" quickly gained the universal recognition and spread with the record speed throughout Italy. Italians appeared to be the most ardent fans of lottery games, so in 1863 the country adopted a decree on the regular holding of the national lottery.

The first lottery games in England are associated with the name of the great Queen Elizabeth I. Those were difficult years for the country and the Queen. The kingdom, rightly inherited by Elizabeth I in 1599, was in a state of economic blockade. The politicians who served at the court believed that the only way out is to marry one of the foreign monarchs. Queen Elizabeth I, by virtue of her strong-willed character, completely refused such a marriage. It seemed stupid and ignorant to her. She found another way out of the financial crisis with the first lottery games and this was a very successful move: almost 40 thousand lottery tickets were sold. All funds raised by the lottery were spent on rehabilitation and public needs.

In Holland, the first lottery games were held in 1726. These were the first in the history of the lottery, numeric lottery games, which served as an impetus for the development of such a lottery throughout Europe.