Developing new games, software developers often turn to antiquity, namely, to those times when Ancient Greece and Rome were considered the world cultural centers and trendsetters of fashion and military power. Unfortunately, those days are long gone, but anyone can touch the beautiful era of antiquity using the NetEnt’s Divine Fortune slot. 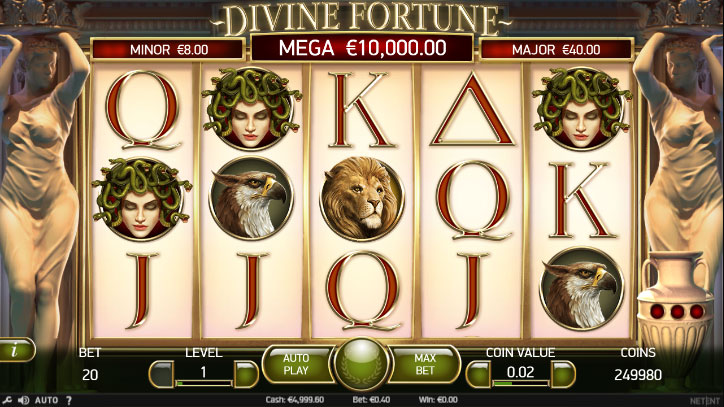 Divine Fortune is a slot dedicated to the culture of ancient Greece, with a variety of beautiful classical forms and mythical creatures. The slot offers a high level of graphics performance and a wide range of mini-modes capable of diversifying the already attractive and memorable gameplay. Medusa, Pegasus, Leo and mystical birds — all this and much more awaits the brave souls who ventured on a journey to the ancient past.

The slot has 5 reels and 20 paylines. The slot is characterized by bright and rich animation, inherent in both winning combinations and static elements that perform only an aesthetic role in the design of the slot. Game reels occupy the central area of the playing space. Animated slot symbols appear on a snow-white background making sounds in the presence of prize combinations. In the upper area of the screen, there is the slot logo and informational messages reminding you of 3 types of maximum jackpots, which can be won in the bonus mode. Below is a convenient panel for adjusting the settings, and on the side of the panel are sculptures of beautiful girls with trays and an amphora with three holes.

Before starting a game, users should select the game level and the denomination of the coins used. Using the level button, select game level values from 1 to 10. By the coin value button, choose your bet from 0.01 up to 50 which is Max bet. Then you may hit the Spin button in the form of a laurel wreath in the central part of the settings panel to start the game.

With the help of Auto Play option, you may set the number of automatic spins and the conditions for the Auto Play suspension upon activation of the jackpot, or upon reaching a certain gain, a specified number of coins. You can learn more about the features of the winning’s accrual, as well as the conditions for activating Bonus games at any time in the Info section.

In the Divine fortune slot, those combinations that consist of x3 or more of the same type symbols on adjacent reels and within one active payline are considered to be winning. Winnings are calculated using the formula that takes into account both the size of the initial bet and the multiplication factor, which depends on the number of matching symbols per line. In this slot, the most promising in terms of winnings are combinations consisting of hydras, lions, buffaloes, and eagles, so the card series are less attractive in terms of possible prize accruals.

There is also a pair of special symbols, the main purpose of which is to supply players with additional bonuses. Laurel wreaths with a fist are the Scatter symbols, gold medallions are the Bonus symbols, and snow-white Pegasus is Wild.

Special symbols in the amount of 3–5 pieces on any cells of the playing field bring participants 5, 8 and 12 free games, respectively, and Pegasus expands to the height of the whole reel when it appears during Free Spins. Pegasus, like Wild, replaces any necessary symbols for a winning combination, after which, in the next round, it remains within the limits of the slot reel involved but goes down 1 position.

After activating the Bonus game, a gold coin is sent to the amphora located on the right side of the screen near the statue of Venus. During the next spins, if there is at least 1 Pegasus on the game screen and at least 2 more gold coins appear, then the bonus round with 5 reels and 15 cells will open. All collected coins are randomly returned to the slot reels and paid from 10 to 200 for one piece. After that, the player gets 3 Free Spins.

During Free Spins, if at least 1 coin is added to the remaining slot reels, then 1 is added to the remaining Free Spins, and so on until Free Spins come to an end or all 15 positions are filled with coins. It is worth noting, that during this Bonus game, empty cells can only be filled with coins, there are no other symbols in the Bonus game. If during Free Spins, one of the horizontal lines with 5 cells is completely filled, then the user receives a small bonus of 40, when filling two lines at once, the gambler receives an average jackpot of 200, and with all 15 positions fully filled, the user wins the top prize of 10,000.

The NetEnt slots always differed from the competitors by realistic graphics and special prize options. This slot fully justified the gamblers’ expectations once again, providing an opportunity to fully enjoy the magnificence of the game and the unpredictability of prize rounds surrounded by ancient Greek attributes. Our reviewers enjoyed Free Spins and the unique bonus system, so when they were playing, the only slot restriction was forgotten — the absence of a risky game.

Where to Play the Divine Fortune Slot