When we started looking for some of the biggest lottery winnings in recent weeks, we came across Canadian Lotto 6/49. The results of this lottery are impressive. On 29 August, Barbara Newman, North York, won $100,000. In less than a week, another Canadian, Sherry Edwards, won $1 million.

These results cannot be ignored. Although Lotto 6/49 is known less than the other popular European lotteries, we decided that you should definitely learn about this lottery. After all, in the European lotteries, large prizes are not won so often. Therefore, we are going to tell you what Lotto 6/49 is, what rules apply in the lottery and how to play it from any country in the world.

Lotto 6/49 is Canada's national lottery. This is the first lottery in this country in which participants can independently choose the numbers in the ticket.

The first edition took place in 1982, and now the lottery is held twice a week, on Wednesdays and Saturdays.

The history of Lotto 6/49 dates back to June 12, 1982. The lottery was held across Canada by various organizing companies:

Thus, Lotto 6/49 was the first national lottery in Canada.

In 2013, the Lotto 6/49 rules changed. Lottery organizers introduced an additional draw: Guaranteed Prize of $1 million. Now in Lotto 6/49, a prize of $1 million is played in every draw. To get it, you need to have a ticket where a unique ten-digit code matches the combination declared by the master.

Since 2013, participation in Lotto 6/49 costs $3. For this money, the player has the opportunity to participate in the main draw and get a Guaranteed Prize of 1 million. The participant can also pay extra for the Extra option and further increase the chances of winning.

The largest gain in the history of the Canadian national lottery was $63.4 million. The record amount was raffled in April 2013, the prize money was shared by the participants of the syndicate of four people.

Fields that need to be filled for this number of draws are placed on one ticket: 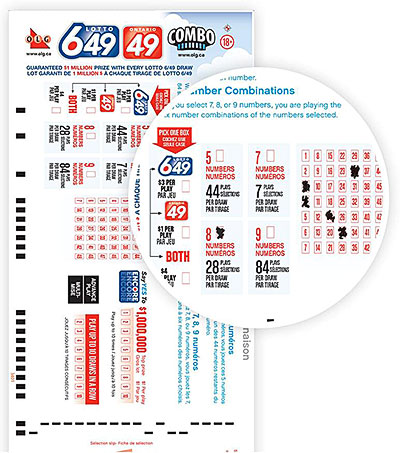 Here the rules are the same as in other "6 out of 49" lotteries. In the ticket, there are 49 numbers in the range from 1 to 49, from them, you need to choose 6 arbitrary numbers. The more numbers match the lottery result, the greater is your winnings.

Choosing Combo mode, the player can cross out not 6, but 5, 7, 8 or 9 digits. The number of winning combinations is as follows:

Also, there is a bonus number in the main lottery Lotto 6/49. The bonus number is taken out of the reel when the six main balls are already known. If the player also guessed the bonus number, he increases his winnings by 50-100 times. For example, in the lotto on September 5, 2018, the participant guessed 5 of 6 numbers and the bonus ball and won $222 thousand. The remaining players who correctly called 5 of 6 numbers received only $2.7 thousand each.

The probability of becoming a winner in the Lotto Guaranteed Prize Draw depends on how many participants take part in the next draw. If there are 10 million players, then the chance of winning is 1 in 10,000,000.

Best Ways to Increase Your Chances of Winning the Lottery

In Lotto 6/49, you can use several methods to increase the chance of winning:

Guaranteed Prize Draw is a lottery that makes one Lotto 6/49 member richer by $1 million. This lotto is held in every draw. So, twice a week, the organizers of Lotto 6/49 make some of the players a dollar millionaire.

Note that the player cannot choose the numbers in the combination for a guaranteed Prize Draw because these numbers are printed in his ticket in advance.

There are 10 balls with numbers from 0 to 9 in the lottery drawing machine. The master takes 7 balls from the device in order showing their numbers. Each taken out ball is sent back to the drawing machine. Therefore, in the winning combination of Encore Draw, the same number may occur twice or more.

Participants, who have guessed all 7 numbers in the order the master got them out, receive $1 million each. Players who correctly call 6 or less numbers also receive prizes: