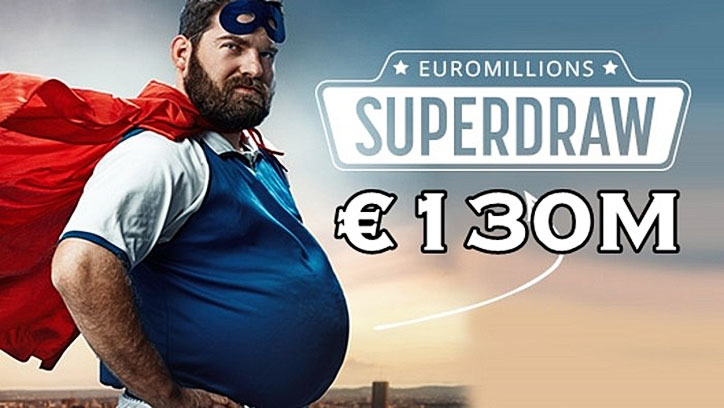 EuroMillions Superdraw is a special draw of the popular European lottery. In general, such super-drawings are held in a similar pattern, just like the usual EuroMillions draws. The main feature of the additional draws is that the minimum playable jackpot amount is 130 million euros, instead of the standard 17 million start.

The EuroMillions lottery is held by European countries, and the decision to organize additional draws is taken jointly by these countries. Usually, additional EuroMillions Superdraw draws are held in connection with holidays or are timed to the significant events. In the year, there are several such draws with a guaranteed prize of 130 million euros, regardless of the amount of the previous regular draw.

The EuroMillions Superdraw prize fund is formed from the reserve fund to which 8.6% of each lottery draw profit is regularly deducted.

How to Play EuroMillions Superdraw?

Nothing is easier. All you need is to purchase a lottery ticket. Buying a ticket for the standard edition, you automatically become a participant in a special draw and get a chance to compete for the top prize. The minimum jackpot amount is €130,000,000.

To win the main prize, you must guess the winning combination, which includes seven numbers –five main numbers and two stars. In a case, all seven numbers are not guessed, the prize amount is increased and transferred to the next draw. The jackpot maximum size is limited to €190,000,000.

It is worth noting, that the draws dedicated to the significant events are called EuroMillions Event Draws and have some special features. In particular, if no one guesses the cherished winning combination numbers, the jackpot amount will be divided between the winners of the next prize category. For the rest, the game is played according to the standard EuroMillions scheme.

EuroMillions Superdraw is a unique opportunity to become the owner of an incredible multi-million jackpot. These lotteries are rarely held, so it's definitely worth a try! The main thing is to believe in your own victory and the Luck will surely smile on you!